Welcome to the consultation website for plans to restore Exeter’s iconic Royal Clarence building and bring life back to this much-loved historical landmark.

The Grade II listed Royal Clarence, which occupies an important site facing Exeter Cathedral, was devastated by a fire in 2016.

Proposals to sensitively restore the 18th century building – parts of which date back centuries before – and enhance its setting in Cathedral Yard have been prepared by leading property developer Akkeron Group, on behalf of South West Lifestyle Brands, which acquired the site in August 2020.

The plans, which include creating high quality restaurant and bar space to make the building publicly accessible, are the result of more than 12 months of detailed consultation with conservation architects, heritage consultants, Historic England and Exeter City Council.

The £17million scheme is focused on restoring the historic building to its former glory by reconstructing the original façade and exterior, and retaining as much of the building’s history as possible.

The new Royal Clarence would feature a collection of 23 apartments with a mix of two and three-bed apartments located on the upper four storeys, including three duplex apartments over two floors. The ground floor would be accessible to visitors with a large restaurant, a bar to replace the Well House Pub and two function rooms for public use.

One of the function rooms will offer visitors a chance to see some of the building’s unique historic fabric exposed by the fire, with an inner courtyard featuring the surviving brick spine walls, which will be stabilised, and a newly exposed Roman wall, lit by natural daylight. The new apartments would retain as much heritage as possible and have been designed to showcase historical features.

A Community Consultation on the proposals ran from December 1st – December 22nd, and included two public exhibitions held in Exeter during early December.

The public consultation period has now concluded but should you wish to contact the project team with any queries, please do so by emailing mary.oleary@dca-pr.co.uk

Feedback from the Community Consultation process is being evaluated and used to help  inform the proposals before a full planning application and an application for Listed building consent are submitted to Exeter City Council in early 2022.

You can view images, plans and details about the scheme in our Virtual Exhibition

DOWNLOAD PDF VIEW IN WINDOW
The development will deliver a mixture of 2 & 3 bedroom apartments and duplexes, alongside the food and beverage units on the ground floor.

The feedback form is now closed 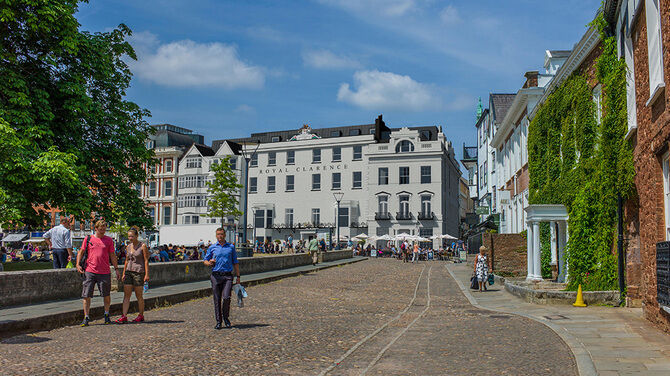 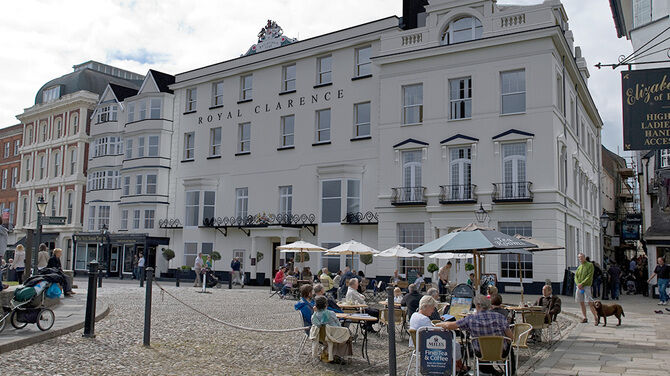 The Royal Clarence was of historical significance with the main building dating back to 1769.The building also contains several structures which date back to medieval times and have…

The Royal Clarence scheme proposed by Akkeron represents a major investment in Exeter city centre and its destination offer, while the creation of residential units would further increase…

Akkeron Group was founded by James Brent in 2009 and the team has led on a number of pivotal property projects across the South West.